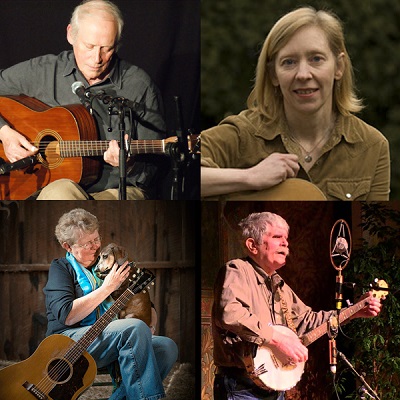 Abingdon, VA: Renowned Scottish folk and ballad singer Archie Fisher will join Kay Justice, Rich Kirby and Carol Elizabeth Jones on the Gazebo Lawn at Mountain Lake Lodge in Pembroke on Monday, June 12 at 7:00 PM.  This special concert is part of the 2017 Mountains of Music Homecoming.  In the event of rain the concert will move indoors to Mary’s Barn.

Archie Fisher, a native of Glasgow, Scotland, grew up in a musical family. In the 1960s and 1970s, Fisher performed regularly with his younger sister Ray on television in Scotland.  He recorded his first album in 1968, and thereafter appeared as a backing musician (on guitar) and arranger for the legenday Irish artists Tommy Makem and Liam Clancy.  In the 1970s, Fisher recorded his acclaimed albums, The Man With A Rhyme and Will Ye Gang, Love.  In 1996, Fisher’s next album, Sunsets I’ve Galloped Into, was spotlighted on National Public Radio.  Following the success of that release, Archie toured throughout North America with British guitarists John Renbourn and Bert Jansch.  Fisher has released two subsequent albums, Windward Away (2008) and A Silent Song (2015), combining performances of his own compositions with those of traditional Scottish songs.  Fisher is a consummate guitarist whose intricate playing creates the perfect backdrop for his warm, almost hypnotic baritone singing voice.

For several decades Scott County native Rich Kirby has been committed to uplifting old-time mountain music in multiple roles – as performer, researcher, radio host, record producer, and workshop leader.  During the 1970s, he performed with John McCutcheon and Tom Bledsoe as the trio known as Wry Straw, and he recorded three albums for the June Appal label, including an acclaimed album of coal mining songs recorded with folklorist Michael Kline.  In 1978, Kirby produced an album of his grandmother’s ballads, Been A Long Time Traveling, and in 2015 he produced the compilation album, The Very Day I’m Gone: The Songs of Addie Graham, featuring performances of his grandmother’s repertoire by a range of talented roots musicians, including Kirby himself.   Kirby carries on the ballad tradition with many of his grandmother’s songs as well as being an accomplished performer on banjo, guitar, and fiddle.

Kay Justice, a respected folk and old-time singer, lives in Wytheville, Virginia.  She has a rich repertoire of traditional songs and ballads. She has recorded three critically acclaimed albums as a duo with Ginny Hawker – Signs & Wonders, Come All You Tenderhearted, and Bristol: A Tribute to the Music of the Original Carter Family.  Justice has been a master artist with the Apprenticeship Program of the Virginia Foundation for the Humanities.

The evening will be rounded out with Carol Elizabeth Jones, a songwriter and acclaimed traditional singer with many albums to her credit.  These include two as part of the folk duo Jones and Leva, two of country and bluegrass duets with Laurel Bliss, an album with Hazel Dickens and Ginny Hawker, and a solo album entitled Cataloochee.  A regular on Garrison Keillor’s, A Prairie Home Companion, she has performed with several groups and toured Africa and Southeast Asia as a cultural ambassador for the U.S. Information Agency.  Her ballad singing will be showcased on a compilation of Appalachian balladry to be released by the Great Smoky Mountains Association in 2017.

Attendees to this concert can also visit “From These Woods,” an exhibit of works by highly skilled Appalachian artisans at the Moss Arts Center at Virginia Tech, one of over 130 cultural events that are part of the Homecoming.

The Crooked Road is grateful for the generous support of the Virginia Department of Housing and Economic Development, David and Judie Reemsnyder, Blue Ridge Beverage, Mountain Lake Lodge, Union Bank & Trust, WDBJ-7, and Chantilly Farm for helping to make the 2017 Homecoming possible.  For tickets, schedules and more information about all Mountains of Music Homecoming concerts and cultural events, visit www.mtnsofmusic.com.

Grab a tube and hit the waves in the #NewRiver! Ou

Camping along the New River Water Trail is a summe

Paddleboarding down the New River is a peaceful &

Fishing along the #NewRiver in #GilesCoVA 🎣 Riv

A River Runs Through It | An art contest for the y

Did you know we typically host two river cleanups

#FreshAirFridays are the perfect opportunity to sh

Okay friends! Now you can share #GilesCoVA with al