History of the New River The New River, part of the Ohio River watershed, is a tributary of the Kanawha River about 320 mi (515 km) long. The river flows through the U.S. states of North Carolina, Virginia, and West Virginia. Much of the river’s course through West Virginia is designated as the New River Gorge National River, and the New River is one of the nation’s American Heritage Rivers.

The New River is recognized as the “second oldest river in the world” and is estimated to be between 10 and 360 million years old. It’s headwaters begin near Blowing Rock, NC and is one of the few rivers in North America that flows northerly.

After leaving NC, the river flows northwesterly through Virginia and becomes the Kanawha River at the confluence of the Gauley River near Charleston, WV. Giles County boasts 37 miles of the majestic New River where it’s depth ranges from a very few inches to a maximum of one hundred feet at the at the base of the towering Palisade Cliffs in Eggleston. The Palisade Cliffs are a historic landmark, and is the area where Mary Draper Ingles was found at the end of her long struggle back from Ohio after being captured by Indians in the 1700’s.

At Narrows, the river cuts a gap fifteen hundred feet deep that separates the East River Mountain from Peters Mountain. Similar cutting action takes the river through three mountains in Giles and a number of smaller ridges.

Class I, II, and III rapids dot the entire 37 miles of New River in Giles Co. making it a great paddling adventure, while beautiful cliffs, bluffs, and mountain views make it one of the most scenic rivers on the east coast. In 1998, because of historical, economical, and cultural importance, President Clinton signed into law the New River as one of the very first American Heritage Rivers.

Prior to the rise of the Appalachian Mountains, the New River cut its bed at a time when the land sloped to the northwest. Amazingly so, as the Appalachians gradually rose around the river, the New River wore away the bedrock at the same rate the mountains formed, leaving behind towering cliffs and prominence’s that hover hundreds of feet about the water level.

The New River has changed its course throughout its long lifetime. At one time it probably followed Spruce Run to Newport in eastern Giles County. In Pembroke it flowed around the so-called “knob” and through the town. At Rich Creek it left its present bed and flowed into Peterstown. Different stories exist telling about the origin of the ancient New River’s name. One story claims that the name comes from a translation from Indian dialect meaning “new waters.”

Another tells of Captain Byrd who had been employed to open a road from the James River to Abingdon in 1764. Byrd used the Jefferson-Fry Map published in 1755, written by Joshua Fry and Peter Jefferson (father of Thomas Jefferson); this map did not show the river, so Byrd noted it as the “New River.”

The third and final story tells of a man named Colonel Abraham Wood who historians consider to be the first white man to travel in the New River Valley area. Wood came across the river flowing in the opposite direction of the New River prior to finding it and assuming it was new, christened it as “Wood’s River.” Some old maps even have it labeled as such.

Indians used the New River as they traveled west years before the pioneers arrived. In the 1600s explorers navigating the New River thought they were close to the Pacific Ocean because of its westerly flow. They named themselves the “men of the western waters.” In 1671 the Batts-Fallam expedition by way of the New River came through to the Lurich area and ended there because the Indian guides refused to take them any farther. They carved their initials in a tree and claimed the territory for King Charles II of England. This was the first proclamation of English territory west of the Alleghenies making the New River the first gateway into the west in the New River Valley. Nobody should miss fishing in the New River. Fast water and big rocks are features of the New River, making it a perfect home for big smallmouth bass and flathead catfish. Anybody can pull their canoe up on an island and fish with jigs or spinner baits to hook some fine trophies. The New River also has several lazy, slow stretches where fisherman can view the spectacular scenery and still have luck fishing for rock bass near grass beds. The slow waters near dams along the river house big flathead and channel catfish as well as walleye and smallmouth bass when fished with live bate. All sections of the river have populations of flathead and channel catfish. Good areas to fish for catfish include Narrows, Pearisburg, and Eggleston in Giles County along with other surrounding areas.

Historic Crests of the New River in Radford 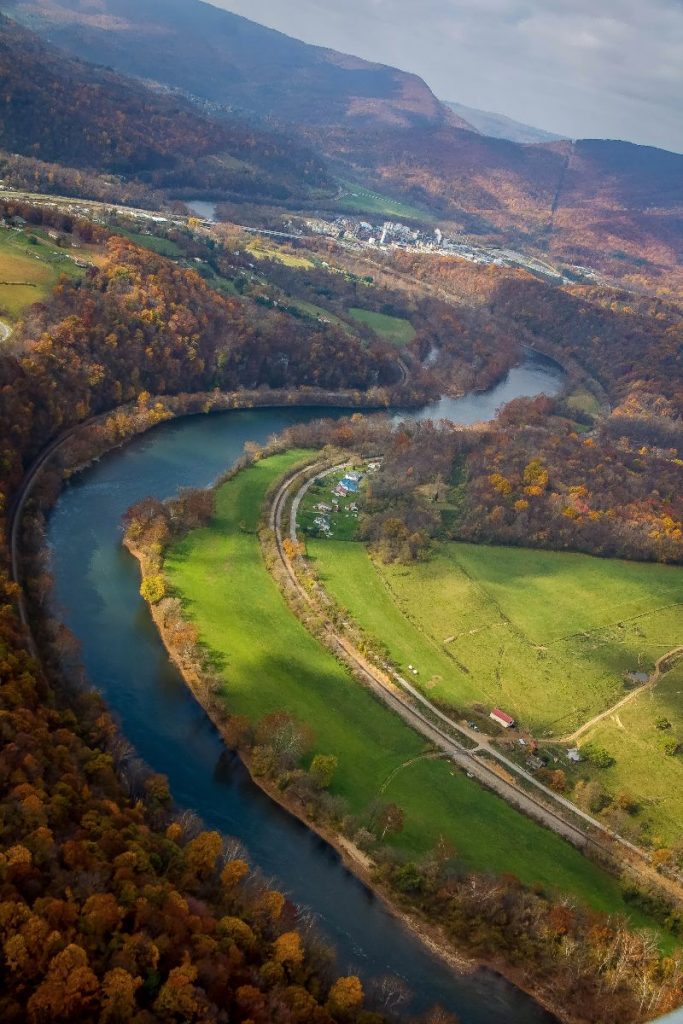